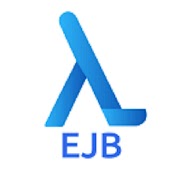 EkaJaladBharatee
Writing foreign languages using the standard qwerty keyboard is laborious and time-consuming. Typing non-English languages in their native script is even more challenging. This is because the usual qwerty layout of keyboards, originally designed for typing English using the 26 character Roman script, does not lend itself to typing foreign scripts. Our research shows that it takes two to five times longer to type a sentence in non-English languages, as it does when typing English. 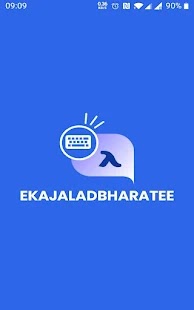 Prerequisite - Please make sure that you have installed the Ekalipi Keyboard also available from the Google Play Store before using this app. Android does provide Native language keyboards, however the average typist but it is our experience that the average typist has a very difficult time using these keyboards. Some of the reasons are: 1. Most native language keyboards require at least two layouts, meaning the user constantly has to switch layouts to hunt for the right character and character combinations. 2. Frustrated with this, the user employs the standard English-Roman keyboard. This makes it worse. a. Most languages need more than 26 letters. So the user is forced to use one character for multiple sounds. b. Not only is this difficult for the writer, the reader has to guess the writer's intent. This is occasionally hilarious. c. Even worse, sometimes it leads to serious misunderstandings. EkaJaladBharatee eliminates these issues: 1. The free "Ekalipi keyboard" downloadable from the Play store supports the standard English Roman characters plus a few additional letters to ensure that every sound in every language can be written. All this, with only 38 characters. 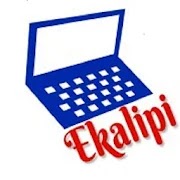 2. As soon as the user types in the upper input box, the equivalent text in the native script appears in the box on the bottom. 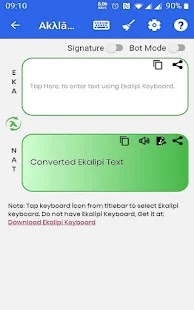 3. The user can make changes and correct mistakes in real-time. 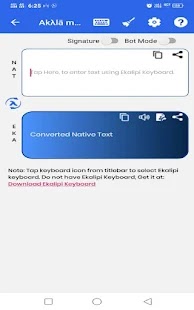 4. The user can customize a standard greeting (i.e. Signature). They can easily or disable the signature directly from the main screen. 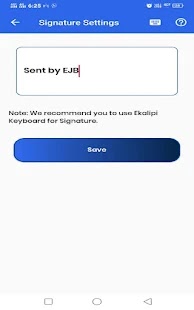 Caveat - The user needs to learn the Ekalipi script. Do not be concerned. In our experience, most users need about two hours to learn it. Compare that, with the time and effort that the user will save every day. 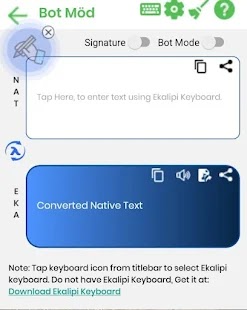 Starting with release 1.2.4, we have added support for the revolutionary Bot mode. The traditional capability is now referred to as Akela (i.e. standalone) mode. Feedback from users indicated that the Akela mode required too many steps for users, who were primarily using the app for social media conversations (e.g. WhatsApp, Messenger). Once Bot mode has been standard, a small floating icon (i.e. an icon which the user can move around) becomes visible. You can use this icon from any Android screen (until manually turned off). 1. While in your favorite social media app, simply tap the floating EJB bot. 2. This will open up the EJB app in bot mode. 3. Type your reply in Ekalipi, see the message converted to your local script, then tap the back arrow. 4. You are back in your app. 5. Paste the message, tap send and you are done. Easy isn't it?
Download EkaJaladBharatee Android App from Google Play Store
https://play.google.com/store/apps/details?id=com.ekalipi.dekp.tts

In this video there are 6 chapters